Sunny Beach Lodge is built on family land where Rata lived as a child with his parents, brother and sisters. He left for New Zealand with his sister on a flying boat in 1953, returning to Aitutaki during the late 1960s with his wife and children for a year or so. The family went back to NZ again until returning to Aitutaki in the early 1970s. 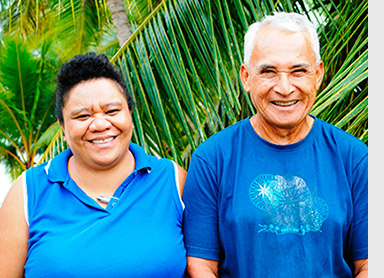 It was in the 70s, that the dream of starting up an accommodation business came about. Rata and his family already had a baking business and also two boats, which brought cargo to shore. They had a coconut thatched house built which was to start off as the accommodation side of the business.

Building what is now known as Sunny Beach Lodge originally started about 1976/77. However in 1977 the family packed up and returned to NZ, once again, leaving four outside walls and the centre wall.

In the early 1990s Rata decided that he would like to return to Aitutaki to complete the dream that had started in the 70s. So in 1994, Rata, his wife (Charlotte), two daughters and grandson left NZ and returned to Aitutaki to finish building his dream.

Sunny Beach Lodge had its first guests in 1995. Starting with four rooms it expanded to five rooms in 1998/99. It now has two beachfront bungalows, bringing the total rooms to seven. We welcome you to visit us!